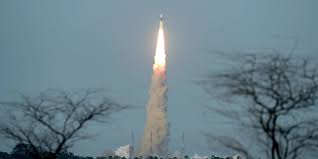 Sriharikota India on Monday successfully launched its second moon mission Chandrayaan-2 from its most powerful rocket with a plan to land the rover on September 7 in the unexplored lunar south pole.

Country’s ambitious low-cost space program, the most complex mission ever for ISRO. If Successful then India will be the fourth country after Russia, China, and the US to pull off a soft landing on the moon.

ISRO Chairman is K.Sivan, this process is done at Satish Dhawan Space Centre in Sriharikota about 100km from Chennai.

Sivan, who announced the success of the mission, was approaching the scientists shortly after the towering geosynchronous satellite launch vehicle GSLV-MkIII-M1, dubbed as ‘Baahubali’, lifted-off from the second launch pad at the spaceport into cloudy skies at 2.43 pm and successfully placed the 3,850-kg Chandrayaan-2 into the earth orbit about 16 minutes later.