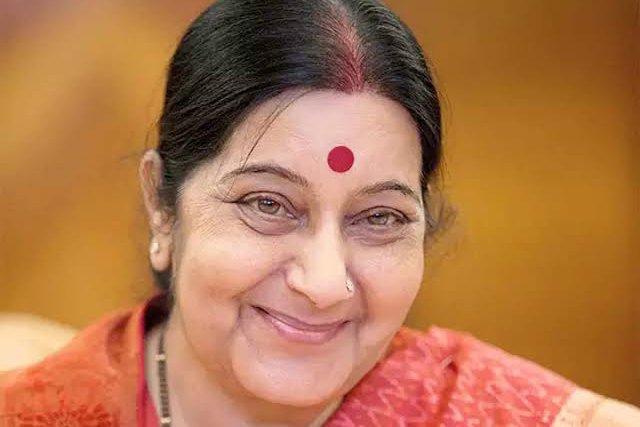 Former External Affairs Minister Sushma Swaraj passed away on Tuesday night. She was 67. Her end rituals will be proposed at Lodhi Road Electric Crematorium at 3 pm.

Sushma Swaraj was an Indian politician and a Supreme Court lawyer. A senior leader of Bharatiya Janata Party, Swaraj served as the Minister of External Affairs of India from 26 May 2014 to 30 May 2019. She was the second woman to hold the office, after Indira Gandhi.

The senior BJP leader was taken to AIIMS at 10:15 PM and was right away taken to the emergency ward. But passed away at All India Institute of Medical Sciences (AIIMS) on Tuesday night after suffering a heart attack in the evening.

Sushma Swaraj’s body has been taken to her home, Dhawan Deep Building, in Connaught Place, New Delhi. On Wednesday at 12 pm, her body will be taken to BJP’s headquarters and the last rituals will be performed at Lodhi Road Electric Crematorium at 3 pm.

Many Politicians twitted about Sushma Swaraj goodness, India loss one more leader in this year.

Rahul Gandhi twitted, I’m shocked to hear about the demise of Sushma Swaraj Ji, an extraordinary political leader, a gifted orator & an exceptional Parliamentarian, with friendships across party lines. My condolences to her family in this hour of, May her soul rest in peace. grief.

PM Narendra Modi took to twitter to condole her death. He tweeted, “Sushma Ji’s demise is a personal loss. She will be remembered fondly for everything that she’s done for India. My thoughts are with her family, supporters and admirers in this very unfortunate hour. Om Shanti.”

The Congress also tweeted, “We are saddened to hear about the untimely demise of Smt Sushma Swaraj. Our condolences to her family and loved ones.”

A dynamic minister during Modi government’s first stint, Sushma Swaraj did not contest the 2019 Lok Sabha elections and chose to sit out of the government this year on account of her health. She had a kidney transplant in 2016 and had opted out of opposing Lok Sabha polls earlier this year due to health reasons.

She adjusted to the position and gave the external affairs ministry a human face for the first time. She was the specialist for any Indian stuck anywhere abroad.

She took a special interest in solving minor issues like issuance of visa to the needy and getting relief to Indians in distress. She built an Indian human capital abroad and the response was an outpouring of support for the Modi government from the non-resident Indian community.