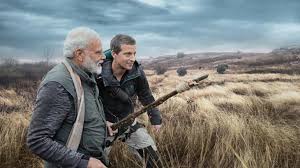 PM Narendra Modi will be seen in new Jungle look on August 12 when he appears on the Man vs Wild television show.

We All Know that our Indian Prime Minister Narendra Modi is how much interested in travelling countries, and meeting with new peoples.

Now you can see that our Indian PM Modi will be seen in the new look and that is jungle look with the wild man Bear Grylls in the T.V show Man Vs Wild, and this show will be aired on August 12 on Discovery channel at 09:00 pm.

This time Narendra Modi is not visiting any other country, this time Modi is doing this T.V show Man Vs Wild in India only in Uttarakhand along with Bear Grylls.

The Man vs Wild episode will premiere on August 12 and will be showcased in more than 180 countries across the world on Discovery network of channels.

The show has been shot as a means to promote awareness of animal conservation and environmental change.

For years, I have lived among nature, in the mountains and the forests. So when I was asked about a special programme focussing on life beyond politics and that too in the midst of nature I was both intrigued and inclined to take part in it,” the PM said in a statement.

PM Modi Said for me this show Man Vs Wild is very important, a great opportunity to me show the beauty of India and Culture of India to all over the World. It was a great experience spending time in the jungle once again, this time with Bear, who is blessed with indefatigable energy and quest to experience nature at its purest,” he added.