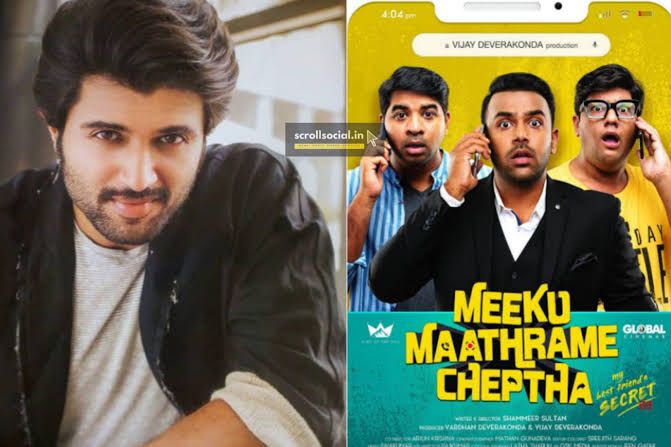 Vijay Deverakonda has shifted from Actor to a Producer with the film Meeku Maathrame Cheptha, which stars Pelli Choopulu director Tharun Bhascker as one of the lead actors in the movie.

Pelli Choopulu is released in the year 2016, it is a comedy-Romantic movie directed by Tharun Bhascker, which is super hit enjoyed by everyone, from that movie Vijay Devarkonda makes many followers.

Vijay Deverakonda’s production house is titled King Of The Hill. The film marks his first production enterprise, and Arjun Reddy star took to social media to give the news with his fans.

The first appearance poster, Meeku Maathrame Cheptha comes across as a wacky comedy-drama. The name of the film ‘My best friend’s secret’ is as interesting as the title of the movie. The cast and crew members of the film are all newcomers.

On Twitter, Vijay Deverakond wrote, “Launching the guy who launched me into the world of Telugu Cinema Herodom. Launching new faces an all-new Director, Music Director, Cameraman, set of actors package. Presenting you I love a laugh riot for all the smiles you’ve given me (sic).”

Vijay Devrakonda was last viewed in Telugu superhit film Dear Comrade, which turned out to be the favourite of the critics. The film had Rashmika Mandanna in the lead female role, she played the role of Women Cricketer. Everyone loved Dear Comrade movie.