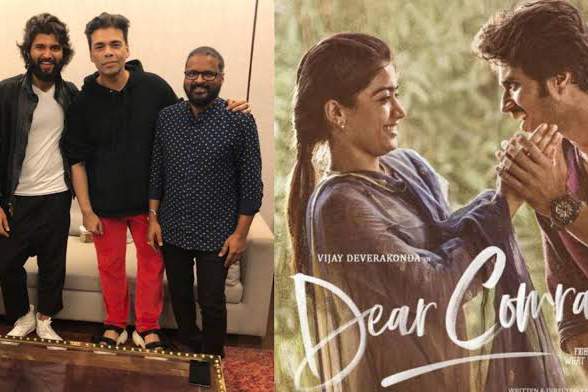 Bollywood Director and producer Karan Johar are all set to remake the Telugu movie of Vijay Devarakonda’s ‘Dear Comrade” in Hindi Version.

Recently Karan Johar posted a picture on Instagram with Dear Comrade team, Director Bharat Kamma, and Actor Vijay Devarkonda and one of the Producer.

Karan Johar mentioned in an Instagram post that he took all rights of Dear Comrade to remake in Bollywood.

Dear Comrade is going to release on 26-July in all theatres of Telugu states, Telangana and Andhra Pradesh.

Before releasing the movie Karan Johar, Bharat Kamma and Vijay Devarakonda watched a movie in private own theatre, and after that Karan Johar decided to make Bollywood version of Dear Comrade.

It seems an interesting point that before releasing a movie, Karan Johar made a deal with Dear Comrade producers and purchased a right to make a remake in Hindi.

Karan Johar doesn’t want to miss a chance because now a day’s every Bollywood movie getting a remake from South Movies.