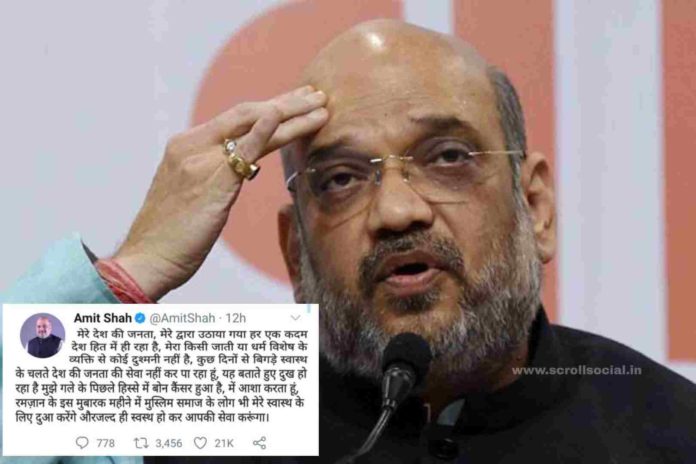 The fake tweet is about Amit Shah’s health situation. People are sharing the picture of the fake tweet as proof to suggest that Amit Shah is sick and suffering from bone cancer. Amit Shah has shared no such information on his Twitter account. It is a photo-shopped tweet.

Amit Shah wrote in Hindi that he has bone cancer and asks blessings from the Muslim community for a speedy recovery. The purported tweet is flowing in the backdrop of people questioning the Home Minister’s low profile during the Covid-19 outbreak that continues to rage.

Tweet(Fake) about Amit Shah on Social Media Here is that tweet: “My fellow countrymen, each step that I took was for the nation’s well-being, I don’t hate any person from any caste or religion. Since the past few days, due to poor health, I haven’t been able to serve the citizens of the country, I am sad to share that I have bone cancer in the back of my throat. I hope during good months of Ramzan, the Muslim community will also pray for my speedy recovery, and I will be at your service soon.”

The fact check website ALTnews posted an article about “Fake tweet portrays Amit Shah saying he has bone cancer” in that article, they showed how that tweet is fake, that Tweet is not in perfect alignment, there are grammatical mistakes and Exceeds character count.