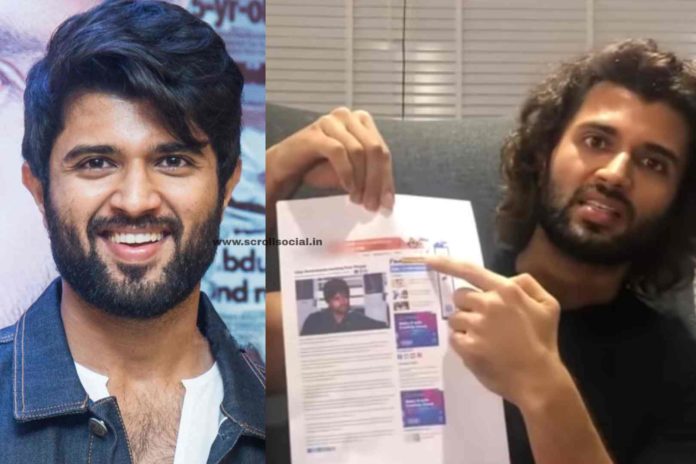 The Website name is GreatAndhra.com (Dare to Write) the website logo titled itself says “Dare to Write.”

Vijay Devarakonda arrived up with a video explanation to reply to news published on a website on the 1st of May.

Vijay’s recent Movie’s Dear Comrade was good to hit, but “World Famous Lover” was not that much loved by the audiences. There will be a remake of”Dear Comrade” in Hindi producing by Karan Johar of Bollywood.

The point about Fake News on Vijay Devarakonda, As many movie celebrities are coming ahead to help the poor and needy in this Corona crisis, Vijay Devarakonda also announced that he would support people through “TDF” and “MCF.”

To help the people who are experiencing hunger this lockdown, Vijay Devarakonda made two big announcements that were praised by the users of social media platforms and his fans.

He announced that he is planning to employ 1 lakh students post the crisis through “The Devarakonda Foundation” (TDF), which he calls as the “Future requirements.” As a resolution to “Immediate requirements,” Vijay said that he plans to spend Rs.25 lakh to 2000+ middle-class families through his website. He said that he is ready to provide Rs.1000 worth home essentials to poor and needy who are applying on his website.

Now, a Telugu website is written about the actor for insulting poor people with his confusing method of donating. The website stated that Vijay Devarakonda failed to help 75,000 poor people by showing them Rs.1000 carrot who applied on his website asking financial help. The site asked if Vijay is willing to serve only 2,000 people why he has two states (Telangana, Andhra Pradesh) build up rather than helping people within a few areas within the city.

The website published that it needs Rs.8 crores to help the people who have applied, but Vijay shared only Rs.25 lakhs with Rs.50 Lakhs provided by his fans. It further accused Vijay and his crew of not doing the donation well. It stated that Vijay has donated just 2200 people with Rs.22 Lakhs and asked people to stop sending applications.

This news that took the attention of the actor made him release a video clarifying himself. “When someone who is thought to be the guardian of truth lies to you or betrays your trust, intentionally-the society is in danger. This video is my responsibility to my people. Meanwhile. You are welcome to continue trying to end my career, destroy my image, write nonsense about me because I don’t give a F*ck” his post on twitter.

In the video uploaded by Vijay Devarakonda, the actor can be seen carrying the article/post published by the website and breaking it down sentence by sentence. He who refused all the allegations of the site asked the website to stick to what they are doing and stick to writing shit. While addressing their title “Vijay Devarakonda Insulting poor people,” he said that the website is earning money by using his name and his hard work. He showed the advertisements they kept in between his article.

In that article, it mentioned about Vijay’s flop movies Dear Comrade and World Famous Lover. They have written that World Famous Lover was such a big failure that it had to be removed from theatres within a week also they mentioned: “It is good to give clarity to his fans and public as he is running a fund with public donations.”

At last of the article, they mentioned, “Flops and hits are part of a star’s journey; He would probably realize this when he gains more experience as an actor and matures as a person.” The End.

Well, we are the audience; we cant declare who is fake and who is not; let’s see.