Citizenship Amendment Bill: What is CAB and Why some Indians are against this Bill. - ScrollSocial
Monday, June 27, 2022

Home News Citizenship Amendment Bill: What is CAB and Why some Indians are against...
Facebook
Twitter
WhatsApp 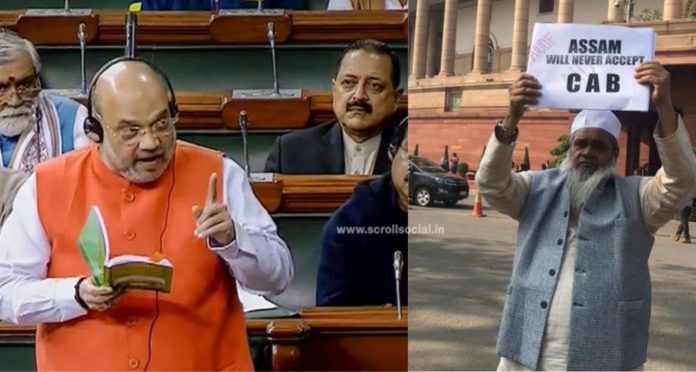 Critics say the bill is part of a BJP agenda to marginalize Muslims.

India’s lower house of parliament has passed a bill that offers amnesty to non-Muslim illegal immigrants from three neighbouring countries.

The questionable bill seeks to provide citizenship to religious minorities in Pakistan, Bangladesh, and Afghanistan.

The government, led by the Hindu nationalist Bharatiya Janata Party (BJP), says this will give sanctuary to people fleeing religious persecution. The passage of the Citizenship Amendment Bill (CAB) will be a test for the BJP in the upper house of parliament because it lacks the majority there. A bill needs to be ratified by both houses to fit a law.

The bill has already prompted widespread protests in the north-east of the country which borders Bangladesh, as people there consider that they will be “overrun” by immigrants from over the border.

What does the Citizenship Amendment Bill say?

The new bill also amends a plan that says a person must have lived in India or worked for the federal government for at least 11 years before they can apply for citizenship.

Now, there will be an exception for members of six religious minority communities – Hindu, Sikh, Buddhist, Jain, Parsi, and Christian – if they can show that they are from Pakistan, Afghanistan or Bangladesh. They will only have to live or work in India for six years to be eligible for citizenship by naturalization, the process by which a non-citizen gets the citizenship or nationality of that country.

It also tells people holding Overseas Citizen of India (OCI) cards – an immigration status permitting a foreign citizen of Indian origin to live and work in India indefinitely – can lose their status if they violate local laws for major and minor offences and violations. What Opponents say about this Citizenship Amendment Bill:

Opponents of the bill state it is exclusionary and violates the secular principles enshrined in the constitution. They say confession cannot be made a condition of citizenship.

The constitution prohibits religious discrimination upon its citizens and guarantees all persons equality before the law and equal protection of the law.

Delhi-based lawyer Gautam Bhatia tells that by dividing alleged migrants into Muslims and non-Muslims, the bill “explicitly and blatantly, attempts to enshrine religious discrimination into law, opposed to our long-standing, secular constitutional ethos”.

Historian Mukul Kesavan says the bill is “couched in the language of refuge and obviously directed at foreigners, but its main purpose is the delegitimization of Muslims citizenship”.

Critics say that if it is genuinely intended at protecting minorities, the bill should have included Muslim religious minorities who have faced abuse in their own countries – Ahmadis in Pakistan and Rohingyas in Myanmar, for example. (The government has gone to the Supreme Court seeking deportation of Rohingya refugees from India.) National Register of Citizens and Citizenship Amendment Bill are Different:

The National Register of Citizens (NRC) is a record of people who can verify they came to the state by 24 March 1971, a day before neighbouring Bangladesh became an independent country.

The protests were expressly vocal in Assam state, which in August saw two million residents moved off a citizens’ register. Illegal migration from Bangladesh has long been a concern in the state.

The two are closely linked because the Citizenship Amendment Bill will help preserve non-Muslims who are excluded from the register and face the threat of deportation or internment.

This suggests tens of thousands of Bengali Hindu migrants who were not covered in the NRC can still get citizenship to stay on in Assam state.

Later, Home Minister Amit Shah proposed a nationwide register of citizens to assure that “each and every infiltrator is identified and expelled from India” by 2024.

Taken together, the NRC and CAB have the “potential of converting India into a majoritarian nation with gradations of citizenship rights,” said sociologist Niraja Gopal Jaya.