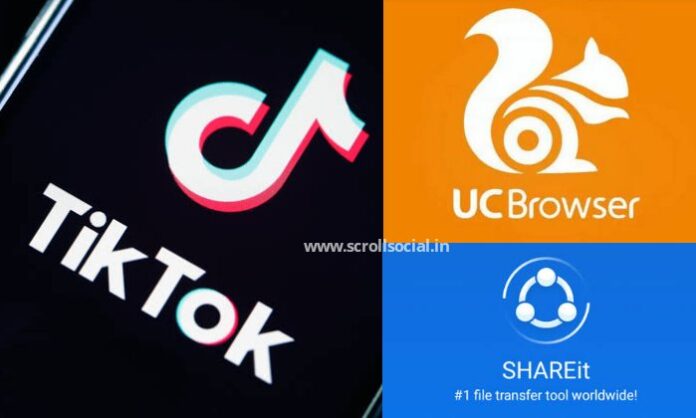 The government of India has decided to ban 59 apps of Chinese origin as border tensions simmer in Ladakh after a violent, fatal face-off between the Indian and Chinese armies. All over India banned 59 Apps in that App Tik Tok also listed.

The government announced the ban on the 59 Chinese apps on Monday night. The government declared these apps were engaged in activities that were prejudicial to the sovereignty, integrity, and defense of India.

The press release further said that the Ministry of Information Technology has received “many representations raising concerns from citizens regarding the security of data and risk to privacy describing to the operation of certain apps.”

“The Computer Emergency Response Team (CERT-IN) has also got many representations from citizens regarding the security of data and breach of privacy impacting upon public order issues,” the press release mentioned.

It further states that the action to ban these Chinese apps progress will “safeguard the interests of crores of Indian mobile and internet users.” This judgment is a targeted move to ensure the safety and sovereignty of Indian cyberspace, it said.

Earlier this month June, data from the Finland-based mobile-ranking platform, AppFollow, intimated that applications like TikTok had borne the brunt of Indian anger over Ladakh tensions.

The popular short-form video app was ranked 5 in top-ten free applications on Apple’s platform in India before the May 5 scuffle between Indian and Chinese troops.

A month later, TikTok slipped down to number 10 on the App Store. Among Android users, the same Chinese application fell from number 3 to number 5 in India ranking. But it still settled on the list of top-ten popular apps in India.

The move to ban these Chinese apps predates violent faceoff at LAC in Ladakh. The government had announced an advisory on April 16 in this interest in the wake of security concerns over zoom meetings.

India is not the only country to act against Chinese apps citing privacy and cybersecurity issues. Taiwan has banned some Chinese apps. So has Germany, including a zoom Video Calling App.