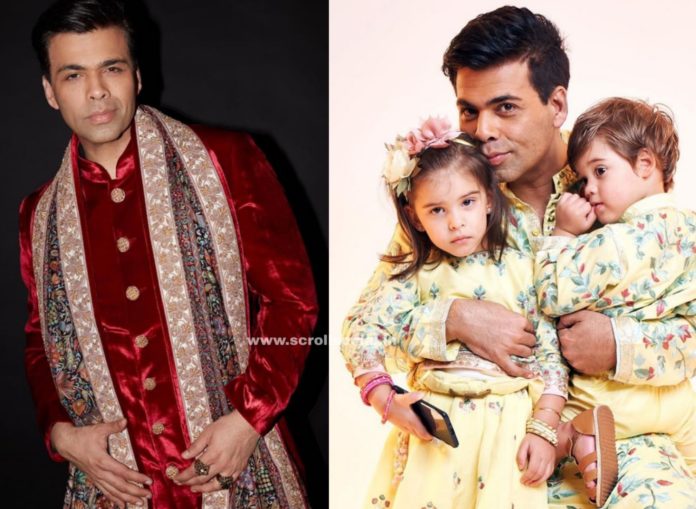 Karan Johar welcomed the twin Kids on February 7th, 2017. They were born via surrogacy and spent over 50 days at Masrani Hospital in Mumbai after their birth. While Karan Johar Kid Yash Johar is named after Karan Johar’s late dad (Yash Johar), Roohi Johar is an anagram of his mother’s name, Hiroo Johar.

The births were registered on Friday, according to Brihanmumbai Municipal Corporation (BMC) Executive Health Officer Dr. Padmaja Keskar. The children were reportedly registered in the birth register as a “baby boy” and a “baby girl.” After that Karan Johar clarified his kid’s name as Yash Johar and Roohi Johar. Karan Johar released the autobiography, “An Unsuitable Boy”, Book by Karan Johar that he wanted to either adopt or have a surrogate child.

An Unsuitable Boy is an autobiographical book written by Indian film director Karan Johar. The book was first published on 9 January 2017. In this book, Karan Johar revealed different stories of his life beginning from his childhood.

Karan Johar expresses these words at the time of launching his Book – “I don’t know what I’m going to do about it, but I feel like I would like to be a parent. I don’t know how it’s going to happen, but I do feel the need because I have lots of love to contribute and I’d like to take it ahead. This feeling needs a release and requires a platform. And that platform could be by being a parent.”

After all that Karan Johar announced this on twitter handle. There was a lot of buzz about Karan Johar’s wife on all social media. Karan Johar doesn’t want to get married, so he chose to get surgical kids.

So if you are searching for Karan Johar wife –she doesn’t exist.

People fake about Karan Johar wife. As per the law, if you need to have a surrogacy baby, you cannot disclose the name of the female person. As per the reports, Karan’s female friend Farah Khan motivates Karan Johar to get surrogacy kids. It is the best way when people don’t want to get married but want to have babies.

As per some rumors, Vandana Melwani was a Fiance of Karan Johar, and there was a love story in between them. Many say it’s fake, and many say it was the truth.

Overall, Karan Johar is now happy with his two kids Yash and Roohi.

Karan Johar is now busy with his upcoming movie Takht.

After the suicide of Sushanth Singh Rajput, Karan Johar faced a lot of tense in his life, as many people pointed Karan Johar, due to Karan nepotism Sushanth has hanged himself.

Well overall now after the months, police and CBI enquiring the cause of Sushanth’s death. Well its really that Karan gives chance to only famous celebrity kids.