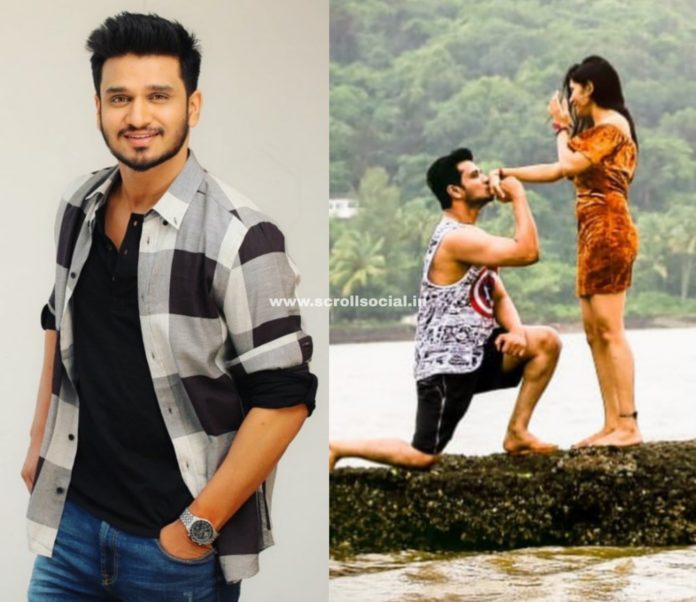 Nikhil Siddharth started his career in Telugu film Industry with Happy Days movie. Before Happy Days he was the assistant director for Hyderabad Nawaabs. He also played a minor role in that movie. Nikhil’s Happy Days was a Blockbuster. Shekar Kammula directed Happy Days. The present Nikhil Siddharth age is 34.

Nikhil Siddharth was last seen in Arjun Suravaram, recently got engaged to his girlfriend, Pallavi Varma, in a traditional ceremony? Reportedly, the engagement, which took place on February 1, was a secret affair with close relatives and friends in attendance.

On February 3, the actor took to Twitter to share the story with his fans. Sharing photos of his proposal and engagement, he wrote, “SHE SAID YESS… Next Adventure In Life (sic)”

SHE SAID YESS…
Next Adventure In Life 🥰🥂🍾 pic.twitter.com/i17d87xezt

According to rumours, Nikhil and Pallavi met each other through common friends and started dating a couple of years ago. They chose to take their relationship to the next level and got engaged with their parents’ permission.

Before meeting each other’s parents, Nikhil and Pallavi travelled on holiday to Goa, where the actor proposed to her in filmy style. He shared a photo from the proposal where he got down on one knee and popped the question to Pallavi. Going by the reports, Pallavi, who hails from Bhimavaram in Andhra Pradesh, is a practising doctor.

Nikhil Siddharth Marriage – It is stated that the couple will get married in a grand ceremony on April 16.

In an earlier interview, Nikhil Siddharth opened up about his relationship with Pallavi and said, “I have someone special in my life now. She is a doctor. She is very kindly; she never disturbs me when I’m shooting or out with my friends. She will not check my phone. She says, ‘chill whenever you want’ and knows that everyone needs their own space, which is what I like the most.”