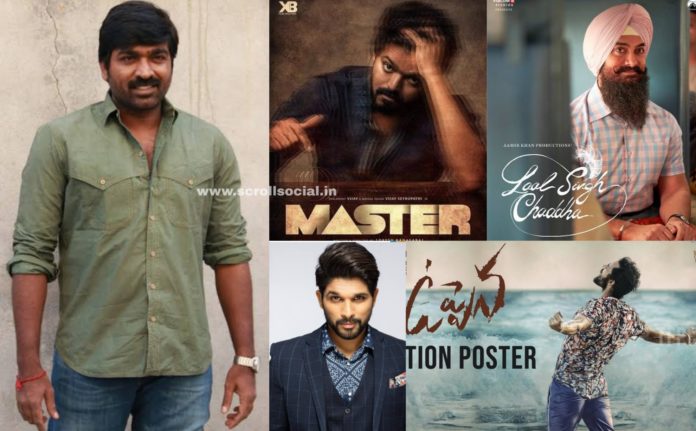 Laal Singh Chaddha is Producing by Aamir Khan and his wife, Kiran Rao. It is loosely modified from the American drama Forrest Gump (1994) and follows historical things that were present in the former.

The official announcement for the film was made on Amir Khan’s 54th birthday (16 March 2019), and it was also confirmed that it would be shot in more than 100 locations in India. Principal photography commenced in Chandigarh on 31 October 2019, with Amir Khan’s mother Zeenat Hussain giving clap. Lal Singh Chadha release date December 2020 at Christmas.

Uppena is an upcoming Telugu movie. Uppena Movie is a debut movie of Vaishnav Tej, Vaishnav Tej is a younger brother of Sai Dharam Tej.

Master is an upcoming Indian Tamil-language action-thriller film written and directed by Lokesh Kanagaraj and produced by Xavier Britto under the banner XB Film Creators, the company’s first production.

Master Movie stars Thalapathy Vijay in the lead role, while Vijay Sethupathi plays the antagonist. Anirudh Ravichander composes the soundtrack. The film is planned to release on 9 April 2020, in Tamil and Telugu.

Initially, Director Sukumar announced this plan with Mahesh Babu as SSMB26. Later due to creative differences between the two, Mahesh Babu walked out of the film by signing his movie Sarileru Neekevvaru under Anil Ravipudi’s direction.

Later Sukumar announced the project going forward with Allu Arjun by making minor tweaks to the script. Sukumar personally went for location scouting across the Rayalaseema region for perfect locations in Seshachalam Hills as the movie plot revolves around red sanders smuggling.