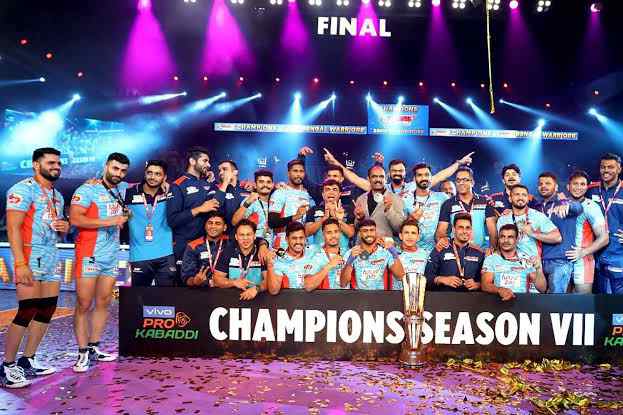 Bengal Warriors were played without their captain Maninder Singh

Naveen Kumar claimed his 22nd successive Super Ten but it was Iranian all-rounder player Mohammad Nabibakhsh who controlled the mat in the Pro Kabaddi grand finale on Saturday where Bengal Warriors have crowned the champions of season 7 defeating Delhi 39-34 in a money-worth top clash.

Delhi began off strong as they took a hefty 8 point lead in the opening stage after forcing an all-out on Bengal Warriors but the latter bounced back in a sensational manner to win their maiden title.

Bengal Warriors were played without their captain Maninder Singh, who had 205 points this season, but Mohammad Nabibakhsh did not let Maninder’s absence. The captain for the final completed an All Out to help Warriors make a comeback right before the end of the first half to help the scores level 17-all.

It was no changing back for Bengal thereon as they delivered two All Outs in the second half. Dabang Delhi was very weak on their defence as the two corners did not win the crucial points for the side. Warriors, on the other side, were strong on both their attack and defence.

Iranian player Mohammad Nabibakhsh was extraordinary throughout the game and so was his teammate Sukesh Hegde, who got a total of eight points.

Naveen looked a little slow in the first half as he failed to get the touchpoints and relied essentially on bonus points.

However, towards the end of the game, his flowed fire and gave his rapid pace but it was too late by then. The young 20-year-old sensation was the leading scorer from both the teams with 18 points.