TSRTC Bus driver attempts suicide in Telangana State, due to the worry over the job loss - ScrollSocial
Monday, June 27, 2022 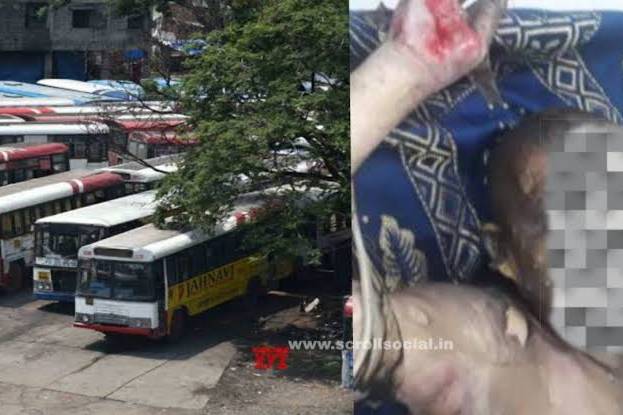 It is alleged that Srinivas Reddy went into depression after Chief Minister K. Chandrashekar Rao declared the dismissal of TSRTC employees who went on an indefinite strike from October 5.

A Telangana State Road Transport Corporation (TSRTC) bus driver on Saturday allegedly attempted suicide by setting himself aflame at his house in Khammam in Telangana. The driver, known as Srinivas Reddy, was admitted to a hospital where he is being treated of serious burn injuries. He is safe now.

The strike of the Telangana State Road Transport Corporation (TSRTC) has now proceeded for the eighth straight day on Saturday. The employees had gone on strike on October 5, asking the merger of the RTC with the government.

The Telangana state government had then given an ultimatum to all the TSRTC employees to return to work on the same day by 6 pm. When it did not happen, the chief minister stated that all the TSRTC 48,000 employees who went on a strike would be considered as “self-dismissed”.

After the TSRTC bus driver attempted suicide, the security across Khammam has been increased as a careful measure. CM KCR spoke with the state DGP and asked him to ensure safety and security at all the bus depots across the state and run private buses in police security.

Gudur Narayan Reddy of Telangana Congress spoke. “Bus driver Srinivas Reddy did not get his salary and had no money to buy clothes for the family for the Dussehra festival. KCR is directly responsible for this shocking incident.”

The Congress leader also demanded that Chandrashekhar Rao be charged for abetting the TSRTC employee to suicide. He also pointed out that so far, four RTC employees died of heart attacks after their “illegal dismissal” from services.

“Instead of being sorry for his ruthless approach, the chief minister shamelessly issued another statement today announcing that those who went to strike will not be taken back and their September salaries, too, would not be cleared,” he said.

Meantime, Chief Minister KCR operated a review meeting on the prevailing situation amid the RTC strike. K. Chandrashekhar Rao directed the officials concerned to make adjustments so that 100 per cent RTC buses are operated on the roads while reiterating that the government would not recognise the “illegal and unlawful” strike under any circumstances. The chief minister also announced that the employees would not be taken back, “come what may”.