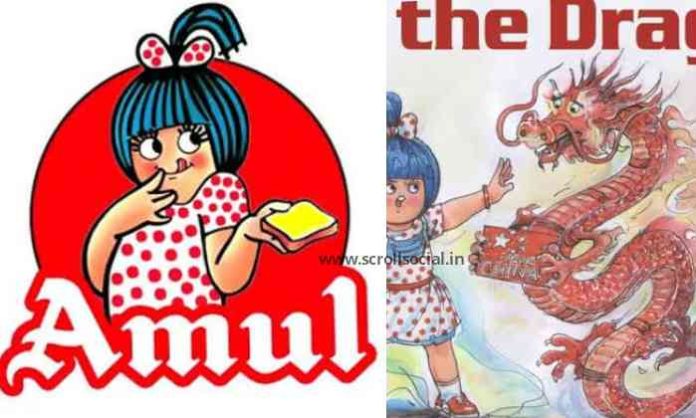 Twitter temporarily restricted the official handle of Indian dairy major Amul over its ‘exit the dragon’ topical, days ahead of the much-anticipated high-level India-China talks to resolve the Ladakh border controversy.

The Image cartoon that Amul shared had the words ‘Exit the dragon’ and ‘Amul Made in India’ written on it. It also had the Amul girl defying the dragon. Behind the dragon, the logo of the Chinese video-sharing mobile application TikTok can also be seen. Amul shared the topical with the caption, “#Amul Topical: About the boycott of Chinese products…”

According to reports, Twitter had blocked Amul allegedly for putting out the post against China in which it had written ‘Exit the dragon’ in an apparent reference to the Chinese military entering Indian territory.

The topical released around the time India-China high-level conversations are taking place on the Ladakh border controversy. Amul, who is known for producing quirky topicals on current issues, took a dig on China.

However, after the backlash, Amul’s Twitter account was restored. The Twitter spokesperson also said on the controversy and stated that it was done for security purposes. They said, “Safety and security of the accounts is a key preference for us, and to assure an account has not been compromised, sometimes we require the account owner to make a simple re-CAPTCHA process.”

Amul Managing Director RS Sodhi stated the company’s Twitter account was blocked on the night of June 4 and restored on June 5 morning when the matter was taken up with Twitter.

“On the morning of 5th June, we complied with the process to reactivate our account, and we were live. Our followers were not capable of seeing the above stated topical due to deactivation, and they came out in support of Amul and were upset with this behaviour of Twitter.”

“Had a call from Shri Manish Maheshwari MD Twitter India, simplifying the issue that the account was blocked due to technical reasons and not about the content published,” he tweeted on Saturday evening.