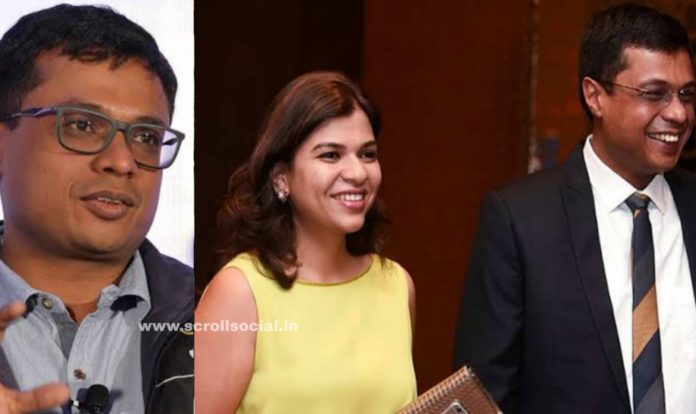 A dowry harassment case has been filed against Flipkart co-founder and one of the most storied Indian entrepreneurs Sachin Bansal, by his wife, Priya Bansal.

In a complaint filed at Koramangala police station, she said, “Given the position and status of Sachin Bansal and his violent and abusive behaviour towards me. I am fearful of the physical safety of my son, Aryaman, and myself.”

Priya Bansal, 35, registered a seven-page complaint against her husband and his family, reported news agency IANS.

She also detailed the hardships she has been constrained from the start of her wedding engagement negotiations way back in 2008.

The Koramangala police received Priya Bansal’s complaint on February 28 at around 9 pm and immediately registered a case.

Priya Bansal, the complainant, has declared that her father had spent ₹50 lakh on the wedding and had given Sachin ₹11 lakh in cash instead of a car. She also alleged that her husband was pressurizing her to transfer properties in her name to him, and after she declined to do so, she was harassed by her in-laws.

When my sister Radhika Goyal was in Delhi, Sachin Bansal had sexually assaulted her. Sachin had tried to transfer all properties in my name to his name, and when I refused, Sachin had physically assaulted me on 20 October 2019. I have been tortured mentally and physically by in-laws for dowry,” Priya alleged in the FIR.

“My husband and I had an arranged marriage through a marriage bureau in 2008 in Chandigarh. A month after the wedding was fixed, A2 (Aggarwal) and A3 (Kiran Bansal) started making dowry demands,” said Priya Bansal in her complaint.

“They had also made very clear and unequivocal demands about how much cash and the kind of gifts they required from my parents for themselves and for my husband’s extended family,” said Priya.

“They were unequivocal in their desire that all marriage related expenses would have to be borne by my parents. The wedding date has already been finalized, my parents thus had no choice but to agree to the demands of Aggarwal and Nitin Bansal,” she said in the police case.

According to the Flipkart co-founder’s wife, just a few days before their wedding, Sachin Bansal’s mother demanded that Priya should wear the heavier gold necklace of at least 15 tolas than the one already purchased by her parents.

The investigating officer said the inquiry is on, and Sachin Bansal has not been arrested yet. (With inputs from IANS)