Flipkart, Groffers, and BigBasket are back to their Online Services - ScrollSocial
Saturday, July 2, 2022 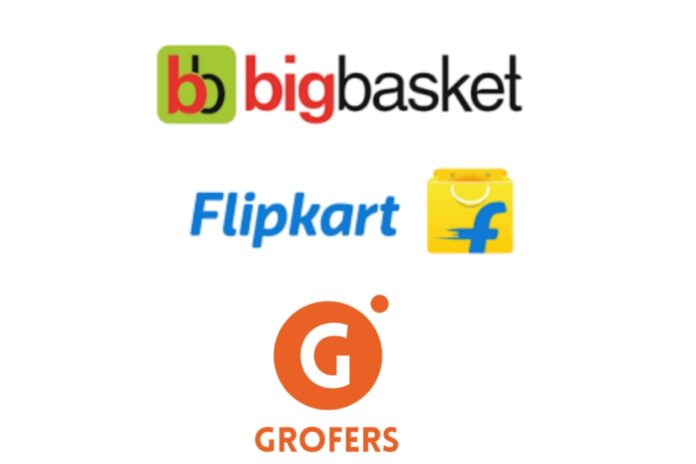 E-commerce giants Flipkart, BigBasket, and Grofers have continued their services in some parts of India a day after their services were suspended due to the nationwide lockdown announced by the Prime Minister Narendra Modi on March 25.

Flipkart, which had closed their services on Wednesday, have now resumed their grocery required services, confirmed CEO Kalyan Krishnamurthy. He added that the decision to return services was taken after law enforcement authorities ensured the safety of delivery executives.

We are thankful for the clarification provided by the government and local state governments on the functioning of e-commerce during the lockdown. We are resuming our grocery services today. India, we are dedicated to serving you at this time. Thank you for your trust, Kalyan tweeted.

Several delivery executives from different online delivery apps had alleged that they were beaten up and harassed by the police and local goons despite these services being termed as essential. The determination of suspending delivery services came after these cases surfaced.

However, now things are getting back on track, and the e-commerce giants are trying to satisfy their commitments. So here are the developments that took place

The e-commerce delivery executives will be given identification cards issued by their respective companies such as Flipkart, Big Basket, or Grofers, among others. The delivery boys can flash the card as an access pass that would help them pass through the nationwide lockdown to deliver basic groceries and other items ordered by the customers.

This would provide the e-commerce giants to carry out overnight deliveries as well to clear the backlog of millions of orders that have not been delivered for 4-5 days.

BigBasket has announced the list of states where they are providing services. The services are operational in Ahmedabad, Bangalore, Bhopal, Coimbatore, Indore, Mumbai, Mysore, Noida, Surat, Vadodara. However, due to high demand, the services might not be very ready for the next 4-5 days, as stated by BigBasket

BigBasket also received the list of cities where it will not be functional for some time. They are Ghaziabad, Gurgaon, Hyderabad, Jaipur, Kolkata, Lucknow, Nagpur, Patna, Vijayawada. However, they are expecting to operate in these cities in a day or two.

BigBasket also declared the list of cities where it will not get operational anytime soon. The towns are Chandigarh, Chennai, Delhi, Ludhiana, Pune, Vizag and Kochi. The company has stated they are unsure about starting their services in these cities.

Flipkart, on the other, has collaborated with the Bangalore Police to ensure that their delivery boys are not bothered.

Bhaskar Rao, Bengaluru City Police Commissioner, also said on Twitter that he had called for a meeting of all food, medicine, groceries, vegetables/fruits, or animal products delivery aggregators and has urged representatives to join.

Bengaluru City Police has asked all the Essential Services Providers to assemble their vehicle movement passes from their jurisdictional Deputy Commissioner’s Office in Bengaluru City.

Gurugram Police has confirmed that the delivery supply chain of all e-commerce retailers for essential items will remain uninterrupted during a lockdown.

Another supermarket giant, Grofers, too, has published the list of cities where they will be operational. The cities are Delhi, Gurugram, Faridabad, Lucknow, Kanpur, Bengaluru. Grofers is expecting to start operations in the following towns in a day or two.

Grofers are also issued the list of cities where they are finding it difficult to operate and might never manage anytime. They reported that they are facing difficulties in Pune, Chennai, and might never work in Chandigarh as the authorities have ignored e-commerce operations during the lockdown period.