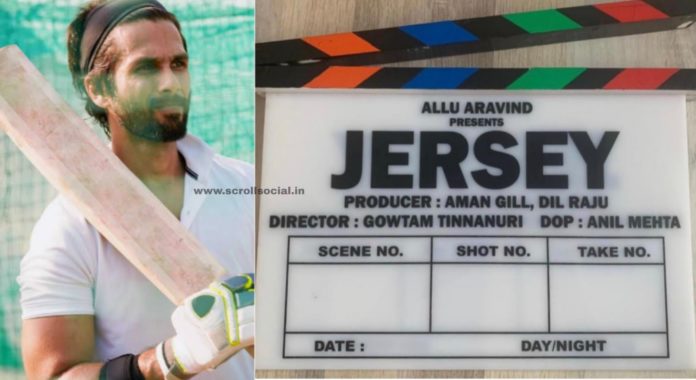 Jersey a story of Cricketer, Husband and Father.

Jersey is also a Hindi-remake of a Telugu film of the same name helmed by Gowtam Tinnanuri. The Telugu version won an overwhelming response from the audience and critics alike. In Telugu version actor Nani and Shraddha Srinath in the lead roles.

The star actor of the film, Shahid Kapoor himself hopped on to his Twitter handle to share the news with his fans, along with a picture that carries the clapperboard.

This Hindi Version of Jersey is producing by Aman Gill, Dil Raju, Allu Aravind presents this movie. Gowtham Tinnanuri is directing this movie, well he is the same director of Telugu Jersey movie.

After Vikas Bahl’s Shaandaar Movie which was released in 2015, the sports drama would see father Pankaj Kapur and son Shahid Kapoor, sharing the screen space together. The Kabir Singh actor would be essaying the character of a cricketer and the veteran actor, Pankaj Kapur reportedly playing his mentor in the movie.

Film Jersey turns around a father named Arjun, a talented but failed cricketer, who chooses to return to cricket in his late thirties because of his desire to represent the Indian cricket team and fulfil his son’s wish of an Indian jersey as a gift. How he makes it big despite being limited by his age forms the essence of the story.

The movie slated to release on August 28, 2020, will also star Super 30 actress, Mrunal Thakur. At first, Shraddha Kapoor was the option for a lead actress but due to busy schedule, Shraddha Kapoor denied this movie jersey. Mukesh Chhabra is a Casting Director of Jersey Movie.

Read: Salman Khan’s Radhe movie will be released in 2020 on Eid.