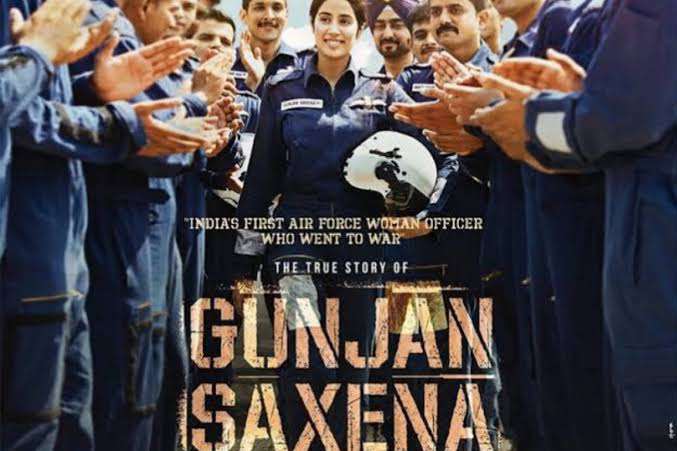 Janhvi Kapoor has stepped into the role of IAF pilot Gunjan Saxena for The Kargil Girl. The film is set to hit the release in 2020.

It was in 2018 that Janhvi Kapoor began preparing for Gunjan Saxena biopic. And now months later, the creators have finally revealed the first-look poster of the much-talked-about film Gunjan Saxena – The Kargil Girl. Karan Johar, who is producing the film, took to social media to share the poster.

He mentioned, “She was told ladkiyan pilot nahin banti, but she stood her ground & wanted to fly! Gunjan Saxena – #TheKargilGirl releasing on 13th March 2020.”

In the poster, Janhvi Kapoor can be seen holding a paper aeroplane in her hand, it shows that Gunjan Saxena character, how she is interested to want to be a pilot.

Gunjan Saxena created history when she climbed into a combat zone during the Kargil War and evacuated injured soldiers from Kargil in 1999. Despite facing the fire, Gunjan and lieutenant Srividya Rajan succeeded to bring the soldiers home. For her courage, Gunjan was awarded Shaurya Chakra.

Janhvi Kapoor, who made her Bollywood introduction with Shashank Khaitan’s Dhadak, has been shooting for the film for a long time. It is for the first time will be viewed in a biopic.

The actress Jhanvi Kapoor also shared the poster of the film on Instagram.

In this movie apart from Janhvi, the film also stars Angad Bedi and Pankaj Tripathi.

Angad Bedi, who essays the character of Janhvi’s on-screen brother in the film, had earlier called the actress “extremely hardworking and talented.” Directed by Sharan Sharma, the film is estimated to hit the screens on March 13, 2020.