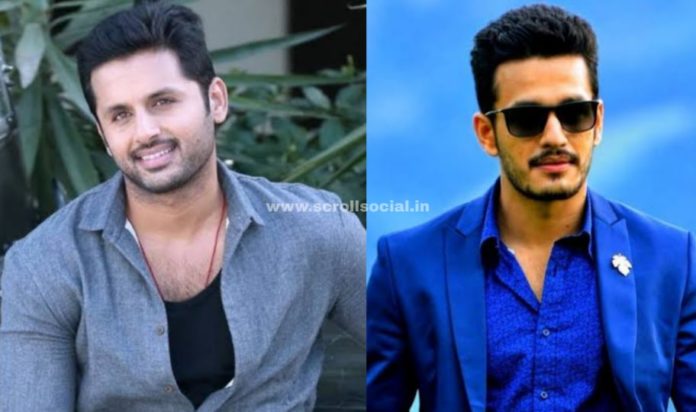 Akhil Akkineni made his acting debut as a hero with a movie Akhil: The Power of Jua, which released worldwide in 2015. The film, produced by actor Nithiin, turned out to be a flop at the box office. It has been five years since Akhil made his debut, and the actor is yet to score a solid hit.

The latest buzz is that Akhil and Nithiin are all set to team up for the second time. Reports are rife that the Heart Attack actor has chosen to bankroll Akhil’s next film. The duo might collaborate with director Surender Reddy of Sye Raa Narasimha Reddy’s.

Recently, Surender Reddy met Akhil Akkineni and told the script of a full-blown action flick. Sources close to the filmmaker explained that this untitled film would have adrenaline-pumping stunts that will blow everyone’s mind.

If everything proceeds as per plan, Akhil Akkineni’s film with director Surender Reddy will go on floors in the second half of 2020. Nithiin will officially declare the project in the coming months.

Akhil Akkineni is presently awaiting the release of his fourth feature film, Most Eligible Bachelor. Directed by Bommarillu Baskar, the film has Pooja Hegde as the heroine. The film is slated to hit the theatres in summer 2020, but it looks like the film might be postponed due to the coronavirus issue.

Police have registered an offense against noted actor Vikram Gokhale and two others for allegedly duping 14 people in a land deal in Pune district, an official announced on Thursday.

The two other accused were known as Jayant Mhalgi and Sujata Mhalgi, the official said on Wednesday.

One Jayant Bhairat had complained with Paud Police Station in Mulshi taluka of Pune district, he added.

In his complaint, Jayant Bhairat claimed that the trio had cheated him and others in connection with a project called Girivan, promoted by Sujata Farms Pvt Ltd.

Senior inspector Ashok Dhumal stated the complainant alleged that despite the sale deed, he has not yet acquired the possession of the land.

The complaint named Gokhale as the chairman of the firm and the Mhalgis as its directors, Dhumal said.

“Based on the complaint, an FIR has been registered against them. But we are checking the facts, and further action will be understood after investigation,” Dhumal said.

When contacted, Gokhale stated the allegation against him was utterly “baseless and misleading.”

“I have already tendered my resignation from the company,” he said.