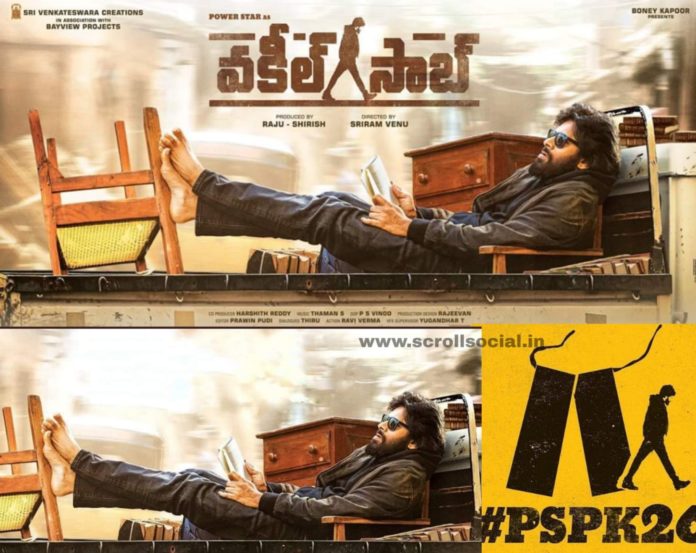 Before the finalise of title, it was searched as PSPK26. The first looks poster of Pawan Kalyan and the title of his comeback film are out. Titled as ‘Vakeel Saab’, the film is the official remake of Pink and the Power Star of Telugu cinema is reprising the lead role played by Bollywood legend Amitabh Bachchan, in Tamil version Thala Ajith played the leading role.

Vakeel Saab Directed by MCA (Middle-Class Abbayi) stars Nani, fame Venu Sriram, the shooting of Vakeel Saab has kicked off early this year in Hyderabad and leaked pics of Pawan in a rugged avatar already did the rounds on social media.

Sri Venkateshwara creations uploaded a poster of Vakeel Saab on their official twitter handle. Coming to the first look poster of Pawan Kalyan’s Vakeel Saab, Pawan Kalyan can be seen reading a book in a relaxed mode. He is fixed amid between broken furniture with his goggles on.

As many are searching, asking in Direct messages and comments about Vakeel Saab release date, as expected vakeel Saab movie may release on May 15.

In Bollywood Pink movie Taapsee Pannu played the leading role and now in “Vakeel Saab” Nivetha Thomas is playing a lead role with Pawan Kalyan. Anjali has been roped in to reprise Kirti Kulhari’s character from the original and Andrea Tariang role is playing by Ananya Nagalla.