What is NFC Technology, and How can you implement it in Your Business
Monday, November 28, 2022

Home Technology What is NFC Technology, and How can you implement it in Your...
Facebook
Twitter
WhatsApp 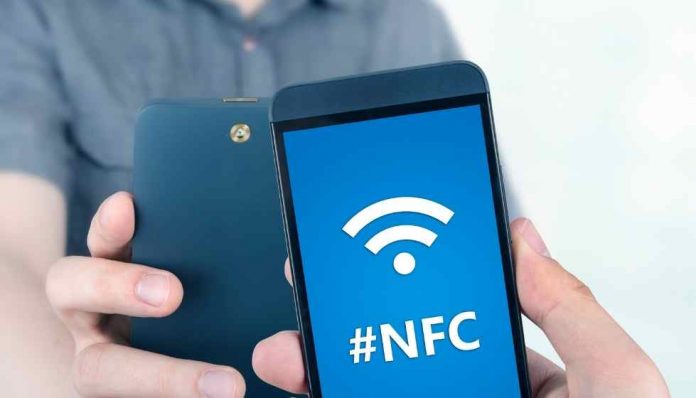 NFC (Near Field Communication) technology is a system designed to connect devices wirelessly at short ranges and high frequencies so that multiple devices can share information. These devices interact through induction in a magnetic field generated by small spiral-shaped antennas located inside the device.

What is NFC Technology For?

The use of this technology offers almost unlimited capabilities. It naturally unifies the online world with the offline world. It is only necessary to carry out the gesture of bringing the mobile phone closer to an NFC chip to go from the real to the virtual.

The basic premise for using this communication system is that situation where a wireless exchange of information is required.

Thanks to this system, the exchange of small amounts of data is facilitated instantly. Fast transmission of information allows you to share a business card, a website, or images. It is a much simpler and more comfortable gesture than using a Wi-Fi or Bluetooth network.

Without a doubt, it is the star use of this technology. The convenience of its use and the expense related to a bank account or an invoice influence NFC technology to become the future payment method.

Some leading manufacturers are using this system to synchronize their different devices. For example, by bringing a mobile phone closer to some speakers, these will be able to synchronize faster and more effectively than in the case of Bluetooth, which needs to pair them previously automatically.

NFC tags or NFC Tags are small stickers that can be placed in different places and configured so that when a mobile device passes over them, they make specific automatic configurations. They act as conditional triggers and allow endless utilities.

An example could be placing one of these stickers on one or more walls of an office so that when a smartphone is brought closer, Bluetooth connectivity and Wi-Fi are activated, or placing one on the desk to enable silent mode and activated only in the event of a significant incident.

How Does NFC Technology Work?

The operation is based on generating an electromagnetic field where data is exchanged between two devices through induction. One acts as a sender and the other as a receiver.

It is a wireless means of communication that operates in the 13.56 MHz band (a band where it is not necessary to have a license for its use). That comes from the RFID tags present in the security systems of physical shops or transport passes.

NFC is an open platform initially designed for mobile devices. Its transfer rate can reach 424 kb per second, aiming at an information transmission approach at small amounts of data.

In this way, there is an immediate communication to carry out identifications and validations of people or teams. Communication speed is its great strength since its immediacy in data exchange does not require prior pairing.

It also has in its favor that its use is transparent to users and that devices with this technology have the ability to receive and send data at the same time. On the contrary, it has the minor inconvenience that the scope of this technology is somewhat reduced since its range of action has a maximum of about 20 cm.

The latest generations of smartphones have this technology with two types of operation:

NFC active mode. Both devices contain energy sources, so they create their electromagnetic field and exchange data with other mobile devices.

NFC passive mode. One of the two devices lacks its power source, so it requires the other to generate the magnetic field. In this way, information is exchanged by modulating the load.

Why is NFC Technology Safe?

Should note that NFC is a very secure wireless transmission medium for two main reasons:

The reduced action distance means it is tough for a third device to interfere with the connection.

Communications between devices can use security encryptions such as SSL, which guarantees that the information circulating between them remains secure.

NFC chip providers must ensure that operations have the same security systems as traditional cards. If the objective is to replace existing forms of payment, they must employ a more significant number of security mechanisms to keep them protected.

Multiple security systems are being added to the process. Noteworthy is that the cardholder’s name is not stored on the PayPass chip, an essential feature of a traditional credit card.

Instead, the terminal at the locker sends a signal to the NFC chip, ensuring that the terminals and the chips perform the same operation.

In short, NFC technology is a communication system between devices that is beginning to be very widespread in specific sectors. Little by little will be a fundamental pillar in the development of many of the activities carried out daily.