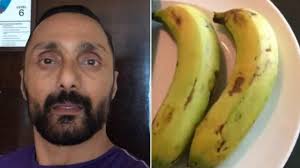 Earlier this week, actor Rahul Bose tweeted a video pointing the price of two bananas served to him by JW Marriott Hotel Chandigarh. In the video, Rahul Bose asserted that he was charged Rs 442.50 for only two bananas.

Excise and Taxation Department of Chandigarh fined 25,000 for JW Marriott for breach of Section 11 of CGST (illegal collection of tax on an exempted item).

In the tweet, Rahul Bose claimed that he was charged Rs 442.50/- for two bananas at JW Marriott in Chandigarh. Marriott has been on the receiving end of much slamming ever since.

Mandip Singh Brar Chandigarh Deputy Commissioner and Excise and Taxation Commissioner had ordered a high-level investigation into the matter.

In a report to Indian Express, Mandip Singh Brar said, “Taking notice of the video and bill posted by the Rahul Bose, I have ordered an investigation. I have directed Assistant Excise and Taxation Commissioner (AETC) Rajeev Chaudhary to convoy a thorough probe on how the hotel had charged GST on fresh fruits. Strict action will be taken if found guilty.”