These Bollywood Actors are against to NRC and CAB Bill - ScrollSocial
Wednesday, November 30, 2022 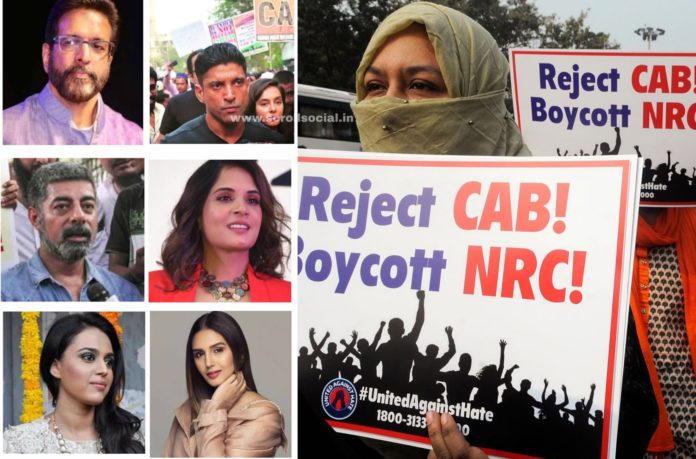 As many Bollywood Celebrities are against this discrimination Bill NRC and CAB. Bollywood Celebrities like Farhan Akhtar, Javeed Jaffery, Anurag Kashyap, Huma Qureshi, Swara Bhaskar, Sushanth Singh,  Rahul Dholakia, Kabir Khan, Raj Babbar, Richa Chadha and Tamil Actor Siddarth. Its sad to see that no Khan’s are in the list.

Javeed Jaffery pointed out that no employment, Indian economy is falling down, No Food, Shelter for poor people the government should focus on development but our government is interested in Hindus and Muslims religious fights. He praised B.R. Ambedkar for the Constitution, unfortunately, our government is totally against that constitution.

Farhan Akhtar stated that when educated young students and many people are protesting which means there is something wrong is happening or going to happen. Discrimination is happening in between religious views. Farhan said As I born and grow up in India it is important to raise my voice.

Huma Qureshi Bollywood actress also participated is Peace rally on against NRC and CAB when an Interviewer came near to Huma, Huma Qureshi said to the Interviewer go and ask the common people because they are suffering more, Why simply you people target a celebrities, She said citizenship should not be decided on bases of names, religion.

Sushanth Singh said that protest should be done without any violence and he is happy that Hindu, Muslims, Christians and Sikhs gathered in a protest supporting each other. He said we all are killing each other, just stop this hatred. Sushanth Singh is still in a confusion that why Savdhaan India contract is terminated.

Rahul Dholakia a Film Maker said if your Indian you should come out and protest against CAB or NRC because its a matter of Our India, Many are thinking that participating in this protest they might lose their chances in Bollywood.

Raj Babbar a Senior Actor said the government is playing a politics for Votes. Government is unlucky.

Swara Bhaskar participated in Peace protest at August Kranti Maidan, She is the only actress from Bollywood who fully supported the protest and shouted the “Halla Bol” slogans.

Swara Bhaskar Tweeted (I do not want my hard money as a taxpayer to be spent in funding this sick biogated NRC/CAB project).

Bollywood Singer Papon Angaraag cancels Delhi show over CAB, says his home state is ‘burning. He Tweeted (It’s painful to see the way Assam is burning! Humanity is suffering! Assam has been burdened with illegal immigration for decades! We don’t deserve this! The diverse, complex mix of the Assamese culture & people and their existence needs to be understood! We need to be heard properly)

Bollywood actress Richa Chadha Tweeted (I am no expert but #CAB #NRC sounds like an expensive and corrosive plan. Its like 160 people died in ATM lines during the demonetization were signalling the death of the economy as well. So the taxpayer will bear the brunt of this hubris?)

Bollywood actress Tapsee Pannu, Yami Gautham and Nusrat Bharucha shared their views on Jamia Milia Islamia College students protests, but no one clearly mentioned the word NRC or CAB because they all know using this words publically may affect their film carrier.