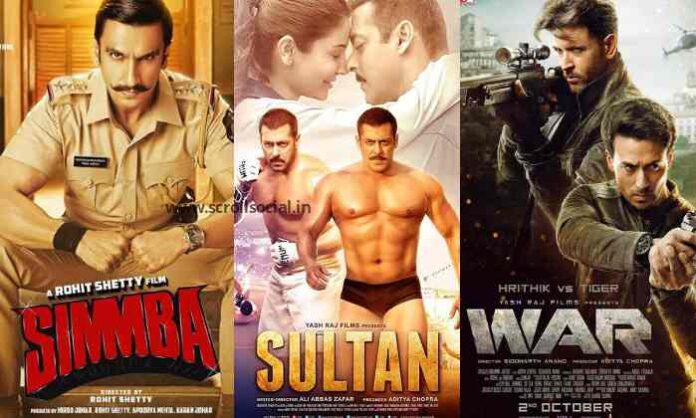 Bollywood is prepping for theater reopening in India and overseas with a combination of old hits and brand latest releases. While some producers are seeing at re-releasing blockbusters to lure fans back to theatres, other stakeholders feel only fresh; unreleased content will compel people to step out of home and overcome the anxiety psychosis carried about by the pandemic.

Earlier this month, Ranveer Singh’s action-comedy Simmba graced the first Hindi film to re-release in Australia after the lockdown.

It had previously hit screens in Fiji before that. The film, directed by Rohit Shetty, had made ₹239.84 crores upon its release in India in 2018. Rohit Shetty’s other film, Golmaal Again, also matched the first Hindi film to release in New Zealand that claims to have leveled the coronavirus curve and has reopened cinemas.

Zee Studios has already made its two money-spinners, comedy-drama Akshay Kumar’s Good Newwz and Ayushmann Khurrana’s Dream Girl to theatres in the UAE, a few before which Tiger Shroff’s Baaghi 3 had reached around $2000 from 15 screens there within one week.

In India too, producers like Yash Raj Films, Reliance Entertainment, and others are considering re-releasing hits like Sultan, War, and Tiger Zinda Hai, among others. However, there is no certainty or direction from the government on when theatres will reopen.

“The realization is that a big-sized film will, at best, hit screens only after four to six weeks of reopening so some testing can be done with older hits,” films trade and exhibition specialist Girish Johar led out.

All stakeholders in the ecosystem, are knowledgeable and accept that audiences will necessitate time to flow back to cinemas. Further, given the long spell away from work, it will take some time to plan and schedule new releases and have promotional campaigns in place to generate buzz for them.

As of now, only two new big-ticket movies, Akshay Kumar’s Sooryavanshi and sports drama ’83, have announced theatrical releases for Diwali and Christmas, respectively.

According to a survey carried by online ticketing site BookMyShow, 54% of Indian entertainment lovers would be ready to get back to cinemas within 15-90 days after the lockdown is raised while the rest would favor to step out after 90 days.

On the other round, various producers are conscious of the need to put out fresh content as people have already waited home for months on end.

PVR Pictures, the distribution arm of PVR Ltd, for example, has marked up new Hollywood titles including My Spy, The Last Full Measure, Ordinary Love, Countdown, The Farewell, The Wild Goose Chase, The Personal History of David Copperfield, The True History of Kelly Gang and Mr. Jones for release in theatres.

“Though it will be a potential burn (to get back to normalcy), we attempt to get these films ready and set individually up as people will surely want new content once things reopen,” Sanjeev Kumar Bijli, joint managing director, PVR Ltd stated.