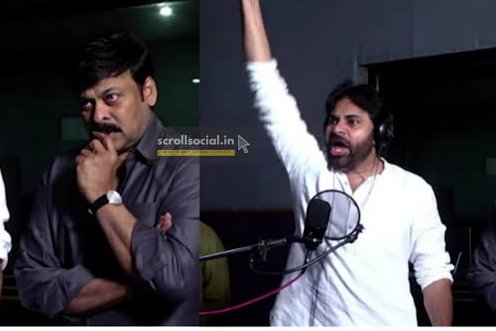 Pawan Kalyan has come ahead to work with Chiranjeevi in the latter’s upcoming period film Sye Raa Narasimha Reddy, which is to release on October 2019. Pawan Kalyan is the storyteller in the film and a video of him from the dubbing studio has captured the attention of fans of both Mega Star and Power Star.

In the video, Pawan Kalyan can be seen welcoming Sye Raa Narasimha Reddy. Chiranjeevi is visibly excited and satisfied by his brother’s Pawan Kalyan work. Director Surender Reddy is also observed with the duo in the video.

Pawan Kalyan is currently not working in movies since the Power Star is focusing on his political career. His last film Agnyaathavaasi, which released in 2018, fell flat at the box office and the actor called it ends. Chiranjeevi, who left the cinema for politics, made his comeback to Tollywood in 2017 with the success film Khaidi No 150.

Sye Raa Narasimha Reddy is made on a big budget by Chiranjeevi’s son Ram Charan, who is currently working with SS Rajamouli’s RRR.