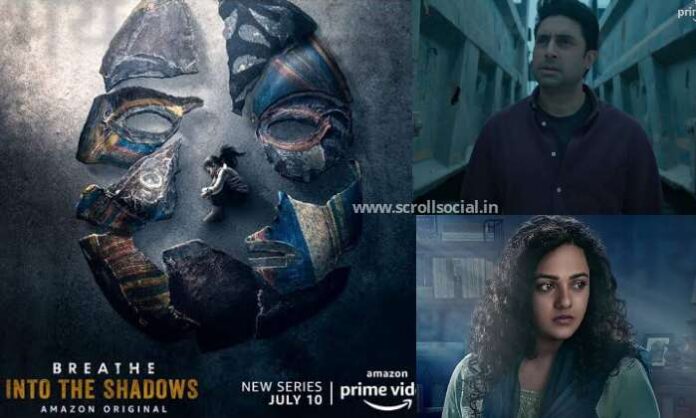 Breathe Season 2 is a thriller, drama, and crime Web series. The first season of Breathe casts R.Madhavan and Amit Sadh, whereas Madhavan played the character of a father who is searching and killing AB+ donors for blood to his son. In contrast, Amit Sadh played the role of heartbroken Cop, who is suffering from relationship obstacles with his wife.

After the release of trailer Breathe season 2 titled “Breathe: Into the Shadows,” In this Season Breathe 2, Abhishek Bachchan and Nithya Menen are portraying a lead role as a wife and husband, were searching her small girl child as a masked person kidnapped there child.

Breathe trailer explains Abhishek Bachchan and Nithya Menen on the side as they search for their daughter Siya. The story about desperate parents veers into the dark territory when Abhishek is asked by a masked person to kill Strangers if he needs to see his daughter alive. “Am I a killer or a father,” wonders the dad as mind games start, and the body count piles up.

Abhishek is a psychologist in Breathe 2. A psychologist by profession, he includes himself in the investigation, but it appears Amit Sadh’s cop, who is overseeing the probe, remains sceptical. Breathe trailer throws more questions than it answers.

Abhishek told them he is thrilled to be making his streaming debut appearance with the show. “The love and support I have received since we announced the launch date of the show had reinstated my belief of continually evolving to connect with newer audiences.

“I am happy to launch my first digital series that is a perfect example of the exciting, genre-defining content that we are now ready to consume at our convenience. I am looking forward to the days to come as we slowly unfold ‘Breathe: Into The Shadows’ to the world,” Abhishek Bachchan said in a statement.

Talking about returning for a Breathe second season, Amit Sadh stated in a statement, “Excited to return as Kabir Sawant in a new, un-imaginable avatar! ‘Breathe,’ and Kabir(Amit Sadh) has connected with fans all over the world and the show’s theme of going the distance to protect the ones you love has resonated all across.”